On December 1, 1952, five men gathered at Gösta Hermansson at Godemansgatan 8 at Hisingen. They were club-bike cyclists from Hisingen with Arvid Adamsson as inspiration source. When the company was parted for the evening, Hisingen’s Bicycle Club was formed. The club was characterized by the start of a great commitment, high ambitions and new building spirit. During Arvids leadership some of the cyclists came to the Swedish elite and one became Swedish champion.

Hisingens Bike Club, with clubhouse on Arvid Lindmansgatan, has changed over the years. The club has had a successful development. From an association that saw the bike as a racing tool for a club that sees the bike as a health tool. Today, all cyclists are welcome to HCK. Those who want to train and compete to come first in goal are as welcome as those who want to ride and enjoy.

Hisingen’s CK is Gothenburg’s largest and Sweden’s second largest bicycle club with over 600 members. The club organizes the annual race Hisingen Runt, which is part of  Göteborgsklassikern and Regionklassikern. Since 2014, the race has also been organized Västkusten Runt, which is West Sweden’s longest cycling race.

Uno Borgengård (Gold Swedish championship 1957)
Susanne Ljungskog (Gold Swedish championship 1998)
Bobbi Thorén
During the club’s 60-year history, a number of very good cyclists have run in the club’s colors. Among the major victories include Uno Borgengårds SM victory 1957 and Suzanne Ljungskog’s repeat of the same 1998 when she won the 93-kilometer SM line race in Vårgårda in the HCK-shirt. We are also looking forward to Kristian Lindgren’s victory in Stockholm-Göteborg in 2005. In 1993 Bobbi Thorén rode as the first Swedish in Race Across America (RAAM). 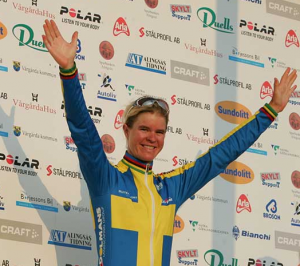 As competitions are a common feature of the club, we also organize a series of road races in Gothenburg.

HCK also participates in various events as volonteers. Examples of this are Göteborgsvarvet and Tjörn Triathlon.

The purpose of the association is to pursue its sporting activities in accordance with the “Idrottsrörelsens operationssidé” and with a special purpose to promote the exercise cycle. This makes our goal fit the great public.

Hisingens CK original logo for a couple of years 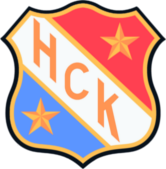